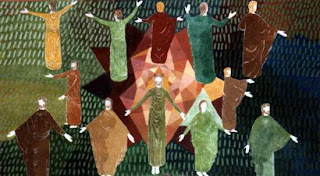 I Was There at Pentecost: A Monologue
Ah, Pentecost. People ask me about it every once in a while. I remember it as through it were yesterday -- though it's been twenty years or more since then. History was being made, the end of an old era, the beginning of the new -- and I was there.
I was or so, up to from for Passover. Just a kid. It was the year they crucified Jesus, a fellow Galilean. I was stunned, heartbroken. After his death I just didn't go home. I hung around with some of his followers, in hiding actually. And then on Sunday, word came that he had risen from the dead. And so I stayed in the city.
Those were heady days, with Jesus appearing to the apostles and others for weeks on end. Then he ascended, went up into heaven. We were to wait in the city, the apostles told us. Something about power and witnessing and the Holy Spirit. So we waited -- about 0 of us -- meeting morning and evening, talking, reading scripture, praying. Nearly ten days we waited like that.
Then one morning when we had gathered together for early prayer -- about 8 o'clock or so -- the building where we were meeting was hit by a whirlwind -- or so it seemed. You could hear the howling of the wind but couldn't feel it in the room.
"O dear Jesus," someone called out. And then came the flames -- dancing flames appeared in the room above us.
"God Almighty," another person shouted. Peter was praying loudly, other apostles joining in. It was eerie, when I think about it. Wind that didn't blow, flames that didn't burn -- like the glory of God on the mountain when he appeared to Moses.
All over the room flames were licking, flaring over people. And as they did it seemed like the brother or the sister would explode. Joy would flood their faces, tears course down their cheeks, praise fill their lips. Hands were up and down. People were laughing and weeping, kneeling and standing on tiptoes reaching up, as it were, to God….
—Dr. Ralph F. Wilson, posted on his Joyful Heart website.  To read the entire monologue, go here.
See also Pentecost Drama, Readers’ Theatre for Pentecost, Dramatic Readings for Pentecost and Pentecost Monologue I.
For more creative worship resources for Pentecost Sunday, click on Pentecost in the list of Labels at the lower right side of the page.

"Like trying to get an octopus into a paper bag." ~ survey response The re:Worship survey on pandemic worship practices has been completed. Thanks to those of you who took time to answer questions and offer comments about how your congregation navigated worship during the early months of the COVID-19 pandemic. If you're interested in reading the results, visit here: https://pandemicworshipsurvey.blogspot.com/