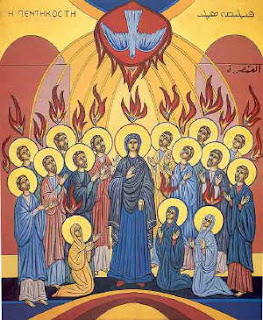 Pentecost Monologue
Setting:  The speaker is an attender at the first “world conference” in on Pentecost.  He/she is dressed as a traveler, perhaps wearing a backpack and a nametag. Something unexpected has happened at this conference—and the speaker is still metaphorically scratching his or her head and eager to think it through. The scene opens with the speaker/pilgrim taking pictures and looking around at all the wonders.
Oh, hi there, are you a delegate too? Where are you from? ? (looking confused) Where is that exactly? I never was any good with geography; I should’ve paid more attention in school. How long have you been at the convention? Oh—you just got here? Oohh. . .too bad! The most amazing thing just happened.
Yeah, just a little bit ago. Me too—just unpacked my stuff at the hotel and went to registration. They were handing out these great maps, so I thought I’d do a little sightseeing before the first delegate session. As I was passing one of the designated prayer sites, I heard this sound like. . .oh, I don’t know, a giant. . .wind, or something. I looked around in case there was a storm coming on (forgot my umbrella, wouldn’t you know!) but no—no clouds, no lightning. A beautiful day, in fact. That startling sound  was coming from. . . .the prayer room.
All by itself, that seemed pretty weird to me. I mean, I know different countries have different prayer traditions, but I’d never heard of a prayer meeting turning into a natural disaster! But there was more. . . . It reminded me, kind of, of a light show, only it was broad daylight and you could still see it, which never happens. At least not where I come from. There we always wait for dark to start the fireworks.
I was thinking about putting on sunglasses and checking it out when everyone in the prayer room started talking in loud voices. It sounded like gibberish at first, but then I began to pick out someone speaking in my language.  What are the odds of that? I mean, I know there are other Medes here, but usually when someone translates, they take turns with the main speaker, you know, and usually, the conference only provides translation into Greek and Latin. And here’s the thing: the other people who were standing around were obviously also hearing their mother tongue. We all sort of looked at each other and shrugged our shoulders. And I thought to myself, “Baby, this is gonna to be some rockin’ conference! Start out like this and who knows where it will go!”
Oh, yeah—forgot to mention that. They were talking about God’s great acts in our history (I mean us Jews) and that now that God had done a new thing—sent the Messiah, Jesus, who had been killed by the Romans but raised up alive! Well, you could have knocked me over with a feather. Have you ever heard of such a thing?
One of the people who was listening started to laugh. “Just ignore ‘em!,” he said. “Can’t you tell they’re drunk?” But then a guy came out of the room to clear things up. “Are you kidding?” he said. “It’s only :00 a.m.! Who starts drinking that early in the morning? No, what you’re hearing is what the prophet Joel predicted: ‘In the last days, God declares, I will pour out my Spirit on all flesh. Then everyone who calls on the name of the Lord will be saved.’”
I gotta tell you, I came expecting something, but this is way beyond what I’d imagined! I wonder if there will be a workshop on this, or if these folks will be leading worship tonight. There’s something about them that seems so. . .real. And I’d like to hear more about this Jesus they were talking about. If God’s Messiah has finally come, I don’t want to miss it! Not to mention actually being filled with God’s own Spirit. . .wow. That would be amazing.
-- From Leader Online, a magazine for pastors and lay leaders in the Anabaptist tradition.
See also Pentecost Drama, Readers’ Theatre for Pentecost, Dramatic Readings for Pentecost and Pentecost Monologue II.
For more creative worship resources for Pentecost Sunday, click on Pentecost in the list of Labels at the lower right side of the page.

"Like trying to get an octopus into a paper bag." ~ survey response The re:Worship survey on pandemic worship practices has been completed. Thanks to those of you who took time to answer questions and offer comments about how your congregation navigated worship during the early months of the COVID-19 pandemic. If you're interested in reading the results, visit here: https://pandemicworshipsurvey.blogspot.com/