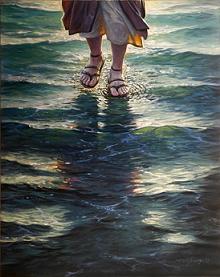 Here is a readers’ theater setting of Matthew :-33 (Jesus walking on the water), one of the suggested scripture texts for August , 0 (Proper A).

Narr:     Immediately after the miraculous feeding of the five thousand,
Jesus asked the disciples get into the boat
and cross over to the other side of the lake.
He stayed behind to dismiss the crowd.
After they were gone,
he went up the mountaintop alone
as he had hoped to do earlier.
When evening came, he was still on the mountain, praying.

Meanwhile, the disciples in the boat found themselves far from land,
fighting a strong headwind, and battered by the waves.

When the sun was just coming up,
Jesus finished his prayers
and came out to meet his disciples—walking on the water!

The disciples caught sight of a figure
moving towards them on the water,
and they were terrified.
They cried out:

Peter:   Lord, if it is really You,
then command me to come and meet you on the water.

Narr:     So Peter stepped out of the boat,
on to the water,
and began walking toward Jesus.
But when he felt the strong wind,
his courage failed,
and he began to sink.

Narr:     And immediately, Jesus reached out for Peter,
and caught him.

Jesus:   O you of little faith!
Why did you begin to have doubts?

Narr:     Then together they climbed into the boat
and the winds died down.
The disciples in the boat worshipped Jesus, saying:

For more worship resources related to Matthew :-33, or any other suggested text for August , 0 (the eighth Sunday after Pentecost), click on Proper A in the list of “Labels” at the lower right side of the page.

“Like trying to get an octopus into a paper bag.” ~ survey response

The re:Worship survey on pandemic worship practices has been completed. Thanks to those of you who took time to answer questions and offer comments about how your congregation navigated worship during the early months of the COVID-19 pandemic.